Now that The Last Jedi has happened, can we all agree at this point there are two good Star Wars movies? A New Hope and Empire Strikes Back. That’s it, right? Return of the Jedi is fine, prequels are bad, The Force Awakens is likeable and Rogue One smells.

I never saw this movie when it came out. I wasn’t excited to see it at launch and I figured I’d wait for Netflix.

Even once it was on Netflix I kept deciding to waste 2-3-4 hours on reruns of The Office, Brooklyn 99, Oceans Eleven and Blue Mountain State.

That isn’t because I cared about all the man-baby crying or accusations of SJW-ing all over it. It isn’t because the films are inherently political in a political climate that’s toxic as hell. I stayed away from as much TLJ related content as I was able because I had no desire to consume it. I didn’t care. I enjoyed The Force Awakens enough. I initially enjoyed Rogue One, although my opinion on it soured over time to the point I realised I actually dislike it and what Star Wars is as a property.

The series has always been political even when its hokey. Underneath the space monks versus space nazis, there is the political inspiration/allegory for the Vietnam War – hippies/rebels against Nixon/empire. There are essays about the prequels/Anikin being an allegory about the Bush administration. The story is always the band of misfits and rebels and good guy collective trying to stop fascist tyranny. A lot of movies have political or societal messages depending how far you want to scratch into it, and it never bothers me.

What bores me is that Star Wars is limited by the exact things that made it seem limitless because without established Star Wars elements to carry the world and narrative such as light sabres, the Millennium Falcon, TIE fighters and X-Wings, and the dueling sides of The Force, what even is this galaxy far far away? Why is the world of Star Wars essentially the same as it was 40 years ago? You never really see The Empire or The First Order tormenting regular people. You don’t get the impression that the every day person is bothered by them.

There are similar story elements from the old films to the new. They make sure to always get their name drops in. They make sure to use things people know even when it fails to be organic. They repeat visuals you’re familiar with.

For an adventure series set across multiple galaxies, they can’t get away from red light sabre vs blue light sabre plus destroy the big evil super weapon.

Darth Vader still basically is the driving force behind everything. From episodes 4-6 to the central figure of 1-3 to revered in 7 to a pointless and gratuitous part in Rogue One.

Star Wars can’t stop squeezing the dead corpse of Star Wars. As a property, its afraid to be new. 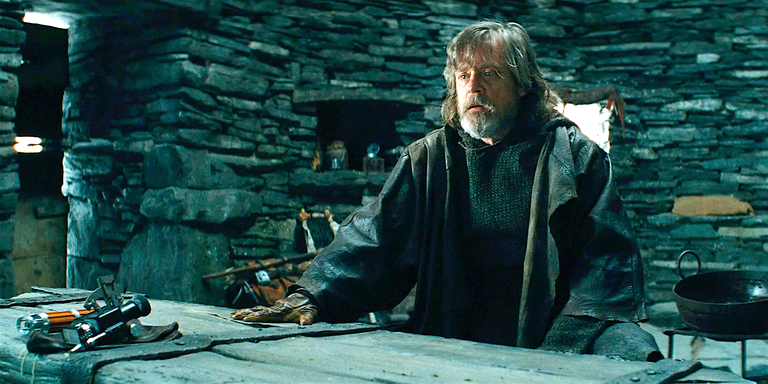 Why did I go into this giant preamble? I guess to say that Star Wars is just whatever.

I understand why some people are so mad about this film and I get why some people love it. It starts doing what I wanted to see, kind of. Its a swing at doing Star Wars its own way. It just didn’t exactly do it well.

The film is messy. Characterisation and traits can be inconsistent. There are pacing issues, tone issues, plot issues. Its probably a half hour too long. The execution wasn’t perfect. In trying to make the twists and turns, it doesn’t always go forward or even sideways. Sometimes it makes the left or right to satisfy and surprise, other times it does enough turns that its back where it started.

They could really make use of a Star Wars bible in the writers room to keep things in line.

Its a film of B-plots. The A-plot is a little more of a B+. Part of the mess comes from pacing of the B-plots and one of them being literally a “these characters need stuff to do” plot.

The comedy in the film doesn’t fit the tone of the overall film. Its really trying to get into that Guardians of the Galaxy vibe where you need a joke to undercut the tension a bit too frequently. It works there because those characters are likeable dicks by design, but these Star Wars characters are not.

The acting is good. Daisy Ridley is really charming and charismatic. Mark Hamill is excellent. There isn’t anyone who is bad. BB8 is a likeable robot, something this franchise has struggled with lately. Adam Driver is excellent. Finn and Rose are pretty much pointless, but their actors sure try to make you care about being pointless.

With quality performances and enough paint, you can hide a lot of the cracks.

I didn’t yell and throw my hands up until 2:05 of the 2:31 run time, but that moment was worth the reaction.

I was expecting something awful like The Amazing Spider-Man 2 or I was expecting another safe play like The Force Awakens with enough jazz to be enjoyable but forgettable.

This was more X-Men: Apocalypse. Sporadically interesting but far from perfect and has its share of wasted potential. A lot of stuff happens, but it kind of doesn’t matter. In a way it has Rogue One disease where you can skip to the third act and not really miss anything, walk away feeling good until you decide to think it over again.

I did not manage to avoid a bunch of chatter of how the movie is #ActuallyGood because it SuBvErTs YoUr ExPeCtAtIoNs, as people were putting it. Subverting expectations is a fine thing. There are movies that do it well. There are movies that do it poorly. Playing to expectations isn’t a bad thing either. That can be satisfying as often as its terrible. But in the end it still has to be satisfying or its just a wet fart.

At times this worked and that’s where the interest was. At times it didn’t because for all the ways it tried to be original there was nonsense mixed in and it still ended with red light sabre Sith and a military against inexperienced blue light sabre Jedi and the rebels. That honestly can’t be a spoiler. Don’t @ me.

Failure can be interesting and a great story device unless you make that failure meaningless.

I’ll be honest, a pinch of me wanted to hate this so I could hang up on Star Wars as a franchise, and the rest of me expected to be completely indifferent.

I don’t know where you take it from here that makes it something new, but if this movie was testing the waters for trying to be “new” then I hope they jump in next time. The time for teasing is over.

Rating: Netflix it when you’ve got an evening and a PB&J. I enjoyed it for the effort in doing what I have wanted Star Wars to do. I didn’t enjoy it for when it fell back into Star Wars. It’s dumb but at least it tried.

One thought on “Star Wars: The Last Jedi Exists and That is Fine”