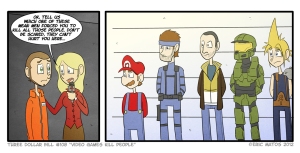 I was watching With Great Power: The Stan Lee Story the other day and there was an great segment of the documentary devoted to the heat that the comic book industry faced during the 50’s because it was comic books that were ruining and corrupting young people. The only proof presented was shoddy – 100/100 juvenile delinquents read comic books, which today would be like asking junior high boys if they played video games – and at the time it gave an excuse and a scapegoat for poor parenting.

“You’re not a bad parent, its those comic books ruining your kids!” – direct quote from the documentary.

Fast forward to 15 or 20 years ago around Columbine.

“You’re not a bad parent, its that heavy metal ruining your kids!”

“You’re not a bad parent, its those video games ruining your kids!”

So where does that leave us? Maybe the issues of troubled youth and mental instability aren’t because of a specific form of multimedia culture but the lack of a proper upbringing. I like comics and movies and music and video games a whole lot. I’ve never shot anyone in the name of demonic music/movies/video games. I also had parents that were very stern with me on what was okay and what was not. Not very long ago after the shooting in Connecticut a major news outlet reported that “According to a friend of the shooter, his favourite weapon in a video game was the assault rifle!” Then the article continued that since he played a video game with an assault rifle that it made him do this atrocity (paraphrased). Neat. Sick reporting bro. I prefer shotguns in most shooting games. I also like to throw fire balls in RPG’s and perform fatalities in fighting games. Not once have I fired a shotgun at a human, tried to manipulate fire in my hand or rip someone in half.

Maybe theses issues go beyond multimedia and into far more difficult avenues of society? But those lack the easy canned outrage that old ass senators, who’ve never held a controller in their life, can conjure up. Much like the ones before them blamed heavy metal. And the ones before them blamed comic books. Much easier to blame things you have no experience with. Its like wrestling and steroids. Any time a wrestler dies, STEROIDS! Not alcoholism, drug abuse, mental illness, etc. STEROIDS! Why? It is easy. It ruined baseball too so demonize anywhere it might be. Don’t mention that caffeine abuse has all the same negative side effects of steroids. Its STEROIDS! because of lazy reporting. Do you have a source? No. Ah whatever. STEROIDS. Take the easy way out. There is an argument to be made about a culture of violence in today’s society. But that culture doesn’t start and end with video games. Ugh.