Wrestling is great. It is a variety show with action and comedy over a soap opera. It’s a stage play of comic book storylines played characters portrayed as super heroes and super villains. And when it all comes together, its worth it. WWE Summerslam got it right. Stories don’t have to be long, drawn out and complicated. Short and sweet, simple and effective,

I was expecting a 5+ hour show with some serious crap. While not everything was spectacular, there wasn’t anything really worth skipping on the main show. The whole thing was worth the time and money.

There’s no way to care about 205 Live. The moves are fine, but Cruiserweight wrestling is whatever now. It isn’t like it used to be where you could only see the acrobatic stuff from the luchadors, Japanese fellas and little Americans. Seth Rollins is flipping around and he’s a main eventer. Jeff Hardy, Daniel Bryan, Dolph Ziggler, Finn Balor and AJ Styles all flip around and be acrobatic. Sticking these fellas guys in their own division just segregates them from requiring caring. There are small dudes all over the main WWE roster. Having these 205 Live guys on their own just shows they don’t matter. They’re not in the same league as anyone on Raw of SmackDown! Has anything interesting happened on 205 Live since Enzo Amore got canned? I wouldn’t know because these guys don’t get character time on TV. 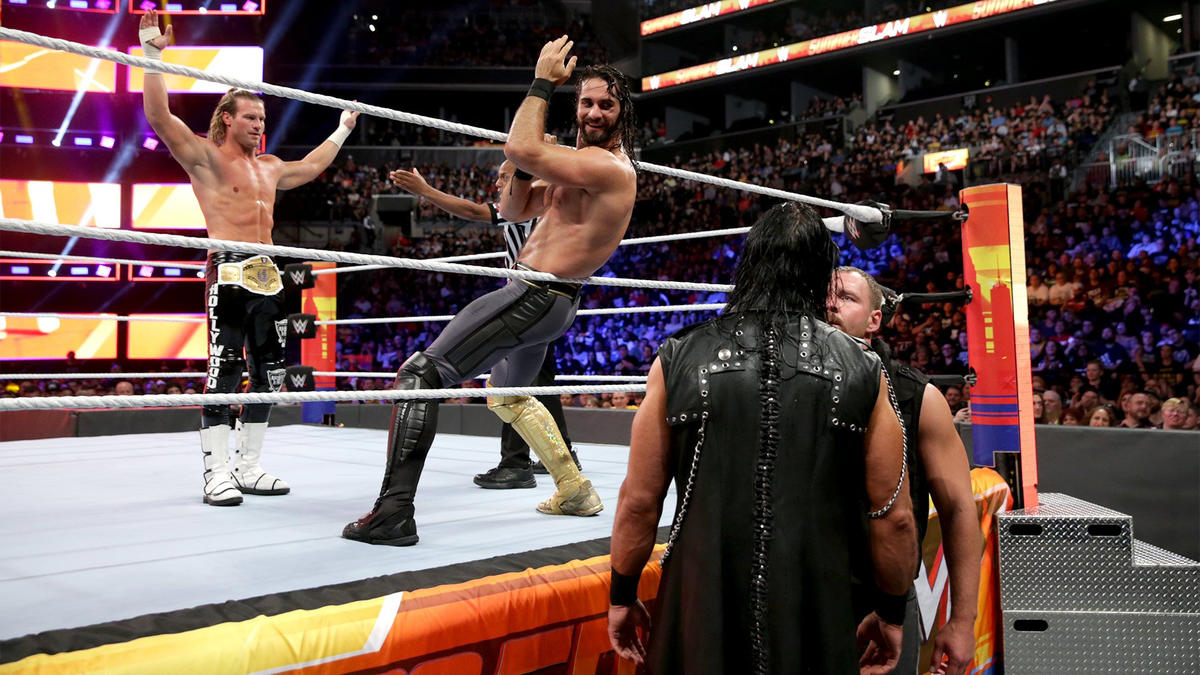 Easily the best program on Raw. Probably the best one since Kevin Owens and Chris Jericho with the Festival of Friendship. These guys have carried a bloated 3 hour show for weeks now. Dolph finally finds a character that works, with a serious heavy that can back him up. Seth has been valiant as a baby face

Seth Rollins with the Thanos vest and the Infinity Bootlet. Remember what I was saying about super heroes?

Dolph Ziggler with the Rick Rude pants. Good to see he’s just embracing being a shameless amalgamation of nostalgic characters that got over instead of pretending he isn’t a rip off and not being over with the crowd.

Beef Ambrose’s haircut is a dead giveaway of a heel turn. Bald guys are not face wrestlers without being a heel.

After all the shenanigans in this build up it was nice to get just a simple match. Minor shenanigans, but nothing that makes the match or win feel cheap or dirty. This match was worth all the wait. These guys are all money. A Seth win keeps the good times Rollins. 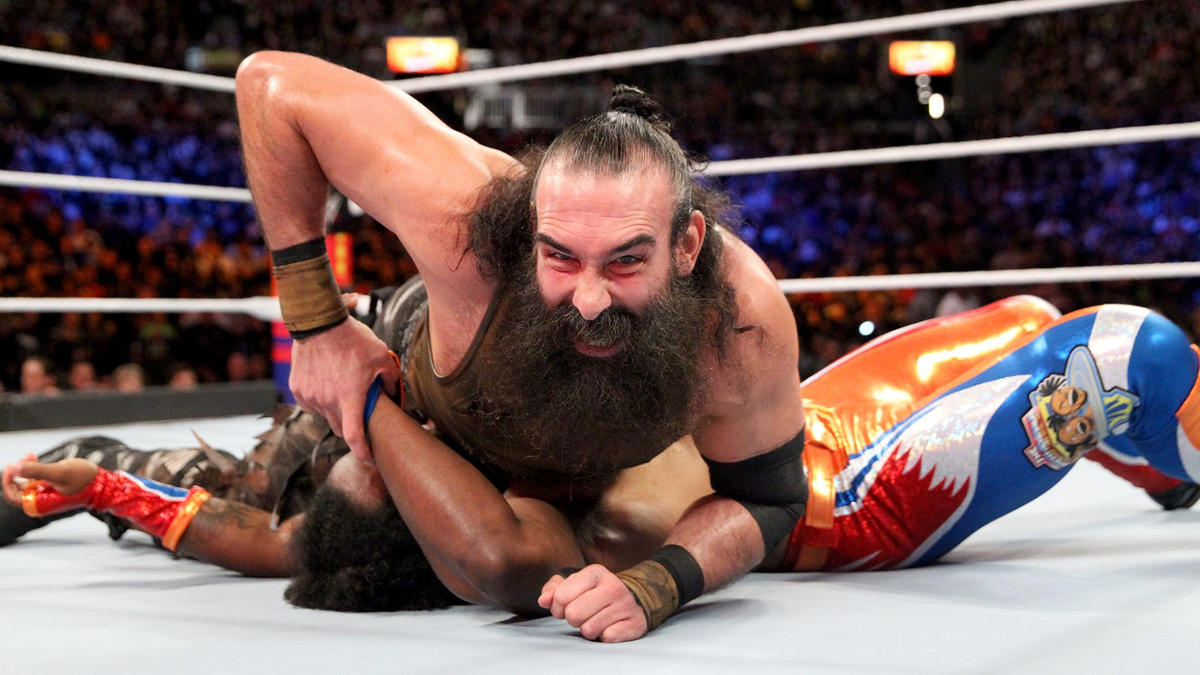 This is almost another who cares. The New Day are silly and fun. The Bludgeon Brothers are silly and okay. Wacky dudes against bush people zombie hunters. Pretty straight forward match. Heels do big stuff. Faces make a comeback. Heels cut it off. Then heels get themselves disqualified instead of losing their titles.

One big gripe:
The Bludgeon Brothers are using prop hammers and they still do the stupid HHH hand protected sledge-hammer belly shot? Prop hammers. How did no one think to make these “usable” in this very exact instance? It looks silly with HHH does it, but it looks totally absurd when they’ve got their hand on the hammer end of a giant prop hammer.

A DQ win keeps things “undecided”. That’s fine, but I miss the days when the big pay-per-view events were definitive. There’s not much else going on at Smackdown! so I guess you gotta keep this running. 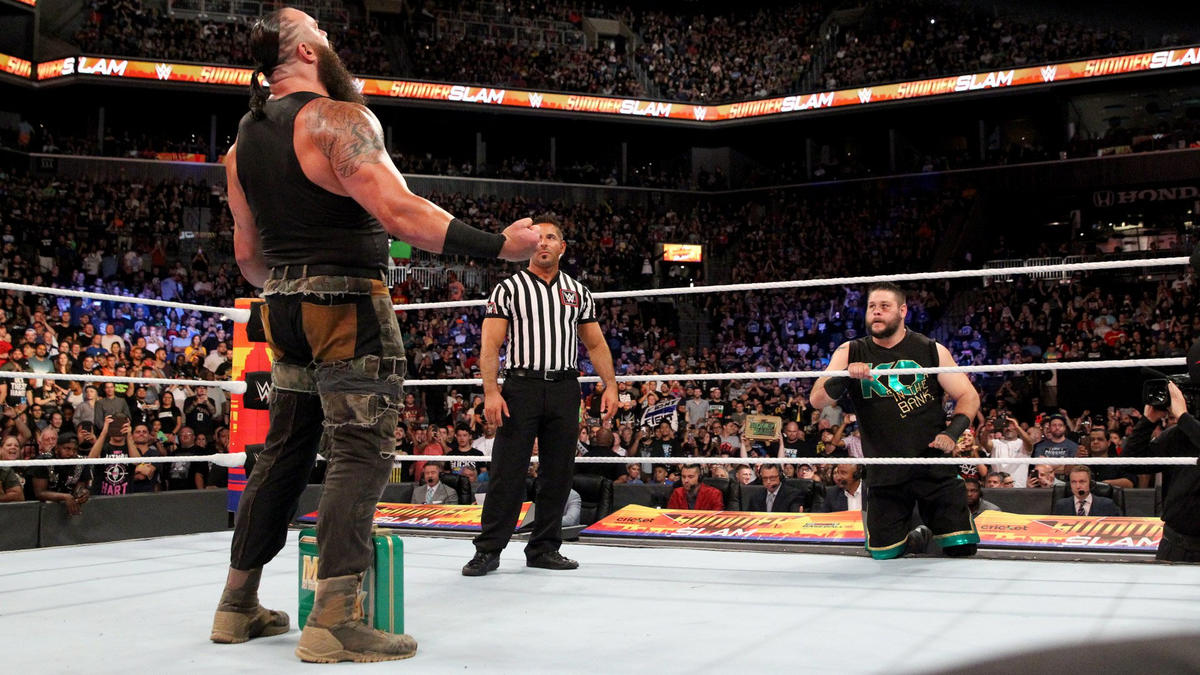 This is all Strowman has to do. Come out. Dominate. Less is more with anyone who can take the label “special attraction” since you keep everyone wanting more. Dudes like Strowman and Lesnar need to tease the audience. Braun shouldn’t be doing long matches. When he’s in a real match it makes it a big deal.

Owens at this point is a mid-card heel jobber. He needs a break to rehab his credibility because he’s eating a couple more pins away from being on the pre-show with Rusev. 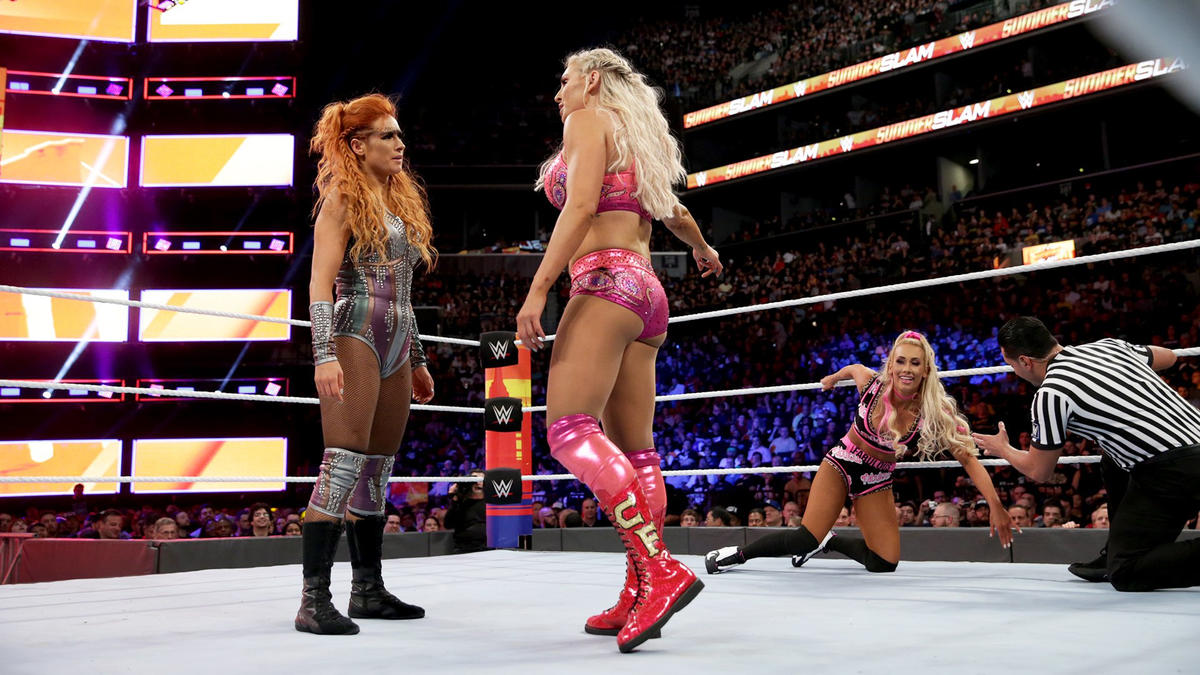 Mella is money. Her gimmick is great. She’s grating and you want to see her lose. If you’d told me that she’d be the longest tenured out of her, Enzo and Big Cass then I wouldn’t have believed you. Her trash talk during the match is impressive. It’s a lost art that only a couple of wrestlers still do. It makes wrestling feel like its crossing over to real sport.

Three ways are usually a bit of a mess. Usually a lot of one-on-one wrestling while someone takes a nap after a standard move somehow pseudo-KO’s them. But the women never really took much of a break. When they were down, it wasn’t an age before they’d get back in. It was a constant cycle. There was a solid mix of Becky-Charlotte, Charlotte-Carmella, Carmella-Becky.

Carmella worked her butt off and kept up with Becky and Charlotte. There were a lot of really interesting moves, transitions and moments. Women’s matches were for so long a bathroom break but now they’re worth the commitment. Everyone looks great coming out of this.

Charlotte pinning Becky is interesting. Carmella never technically “lost” her title and so she still has a legit claim going forward. Becky being pinned makes Charlotte look stronger, but also like a baddie for doing it to a friend.

That whole ending just has me expecting a Becky heel promo on Smackdown despite her finally REALLY getting over with the crowd. I’ll crap myself if she drops some “Fans didn’t believe in me line!” like a bad Ziggler promo.

Charlotte doesn’t work as a face. She’s a head taller than all the other women. She’s probably 130-150% their body weight. She’s powerful and athletic. She’s the daughter of Ric Flair. Those aren’t baby face characteristics. Hopefully they don’t butcher this. 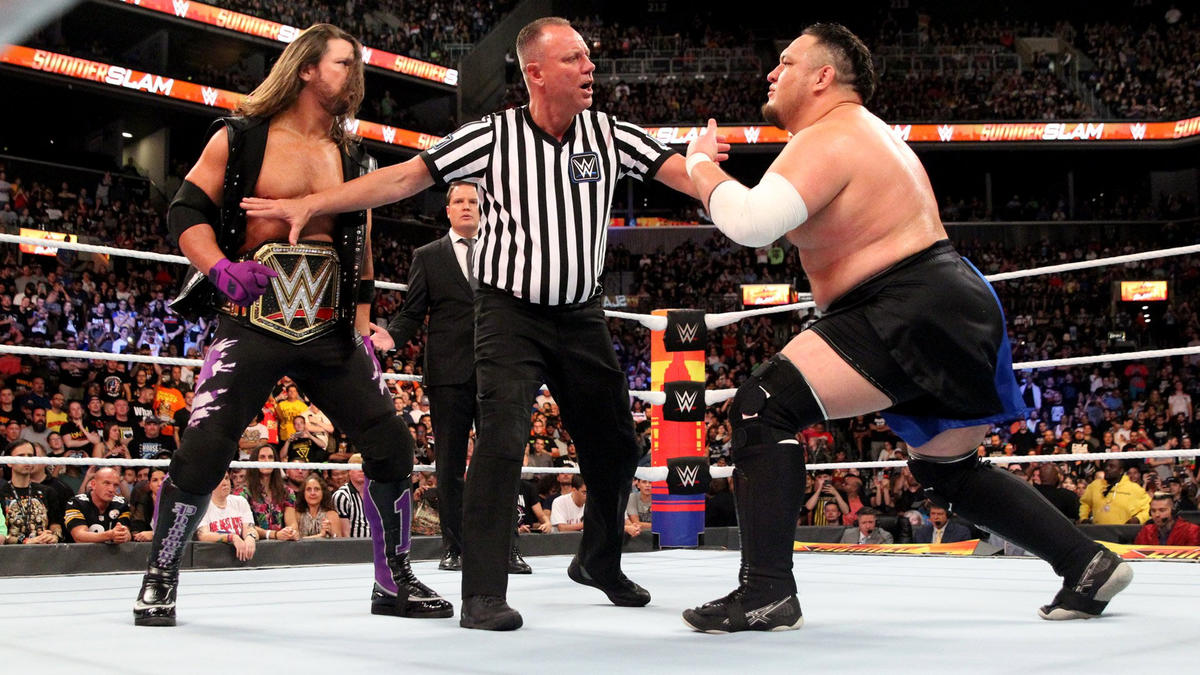 AJ is phenomenal and he’s a better all-round performer than he used to be. He’s way better at making things look like a fight, like he’s mad, like its serious than he used to be. Mic work goes a long way to selling a match. Moves are neat, story is the meat.

Joe is great and a convincing badass. Its unfortunate he’s been injured as frequently as he has since it takes your credibility away when you’re supposed to be a destroyer and you miss month after month with injury. It is kinda supposed to be the other way around.

He’s so acrobatic for a big guy. The top rope knee and his corner moves are worth it. The Coquina Clutch looks like a real submission. He looks like he’s fighting.

These guys got me to buy in. AJ stepped up his game and it got me. Not just moves, he really was fighting like he was pissed off. All the drama with his wife and daughter, Joe claiming he was their new “daddy”, as 2018 as that is, was still great.

AJ snapping at the end and going to town with the chair was fitting. A messy finish works here. It helps tell the story. It fits. Things will continue, but it doesn’t feel lame. 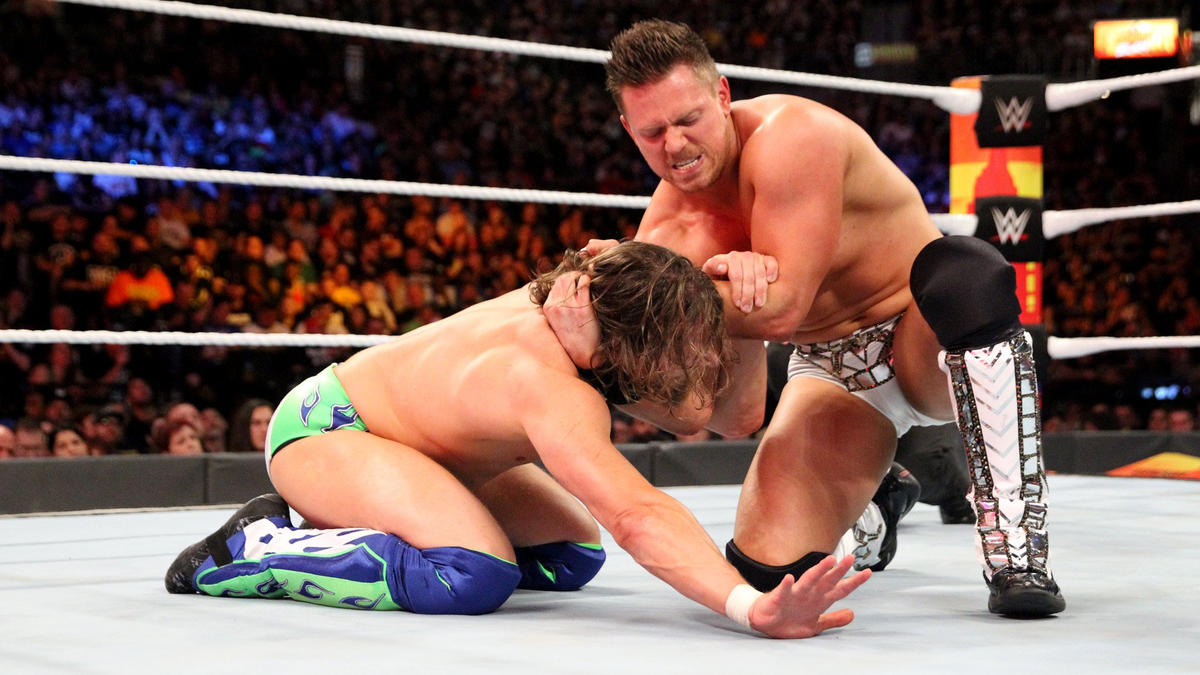 The Miz Rules. Daniel Bryan is boring and played out at this point. Nothing about him has changed in the better part of four years now. He’s a little dude who tries hard and chants “yes”.

The Miz is a heat magnet. He’s an actual superstar. He’s an actual character. And he’s over. Watching people Yes! chant along with Daniel Bryan is always funnier when the same people are doing the Yes! chant while Miz is delivering his own stupid kicks. Pick a side you bums.

The Miz winning was pretty unexpected, although the crying Daniel Bryan marks will tell you otherwise. I cheered when Miz won. He deserves it. He’s been an MVP on Raw and Smackdown! carrying the primary non-main event program for months. Using shenanigans to win is okay and makes sense. He’s a trickster. He’s a heel.

This match made sense from the build to the promo to the moves to the finish. So good. 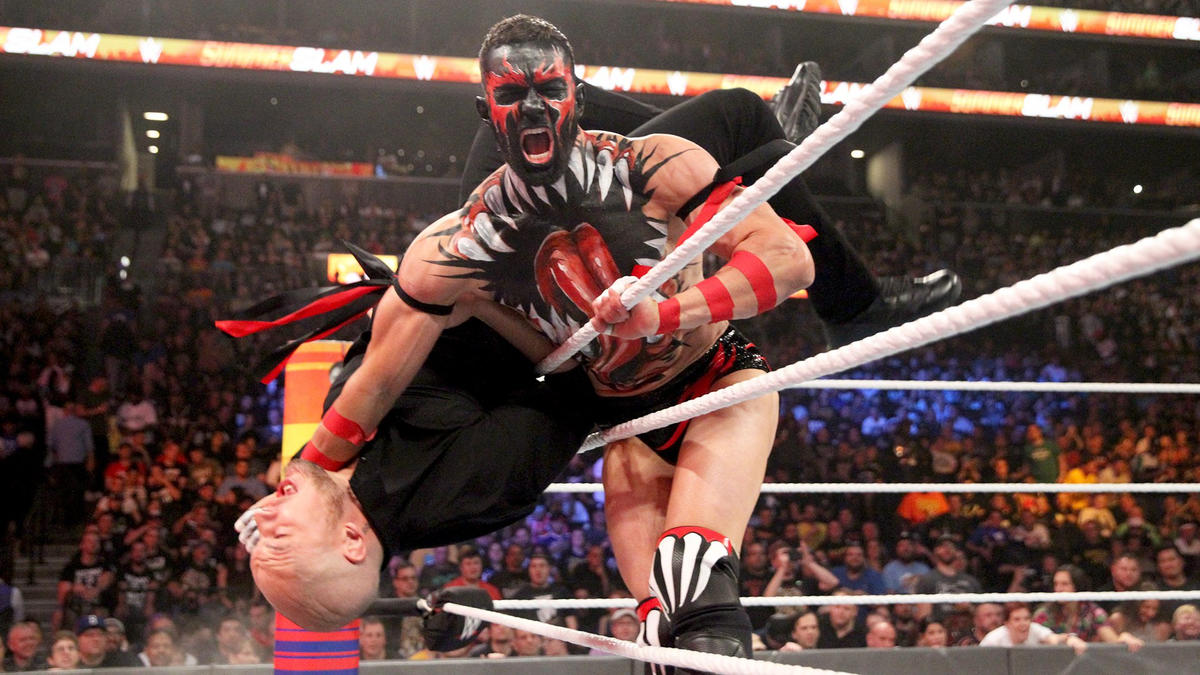 Seeing the Demon was neat, if out of the blue. Squashing Corbin is the only way to go. You don’t go all anime with Balor’s “Final Form” unless you make it dominant. Regular Finn Balor? 50-50 wrestler in the mid-card. Demon Finn Balor? World title level wrestler capable of easy squash matches in the mid-card. 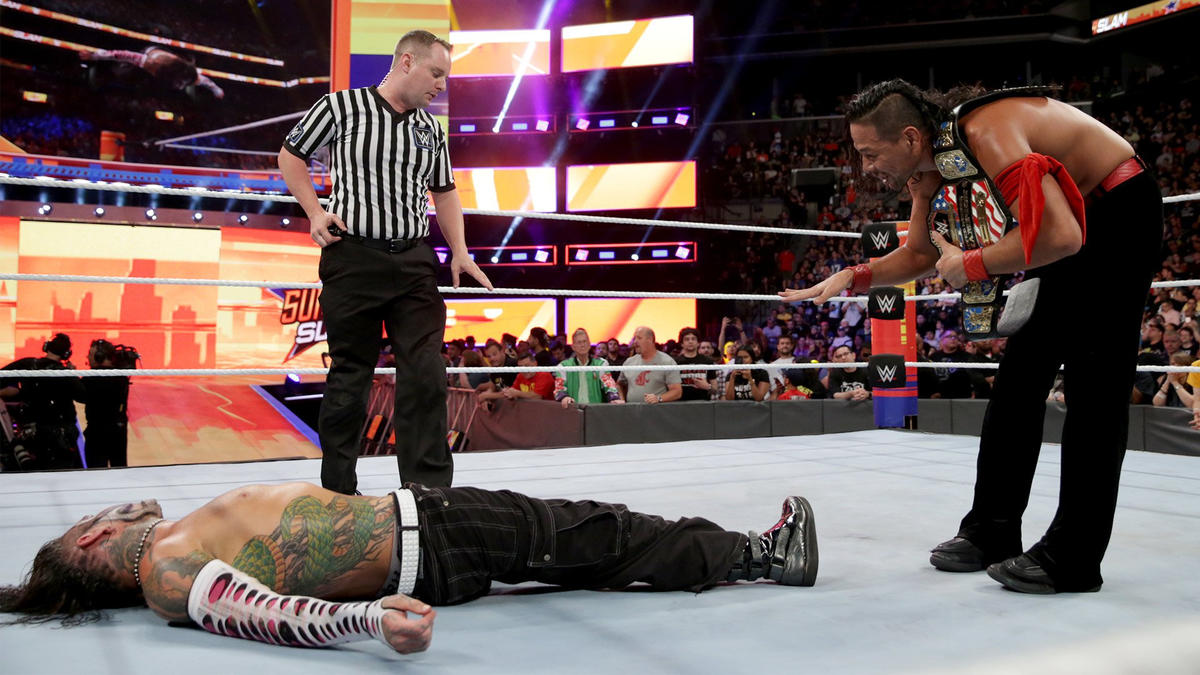 I don’t understand Shinsuke Nakamura. I don’t understand his appeal. Once his entrance is over, what are you left with? A skinny guy with limp offence and a lame finisher (Don’t @ me over the Kinshasa. Its a limp looking kick most of the time. It’s as bad as the Zig-Zag in how bad it looks when it isn’t perfect.) He’s had maybe 3 actually good matches since debuting on the main roster. He’s trying to be a heel now, and he’s doing okay, but he still does his baby face stuff to get cheers from the crowd. Like, come on dude.

Jeff Hardy has lost about a step since returning and he was already about 3 steps behind from his prime. Fun nostalgia act, but the dude isn’t much in the ring anymore. Credit to him though, he gave it everything he could in this match. He took some rough moves. He crashed and burned leaving a win on the table for Shinsuke.

The Orton tease at the end was confusing. Blandy Boreton should not be a babyface and even as a heel he’s played out. 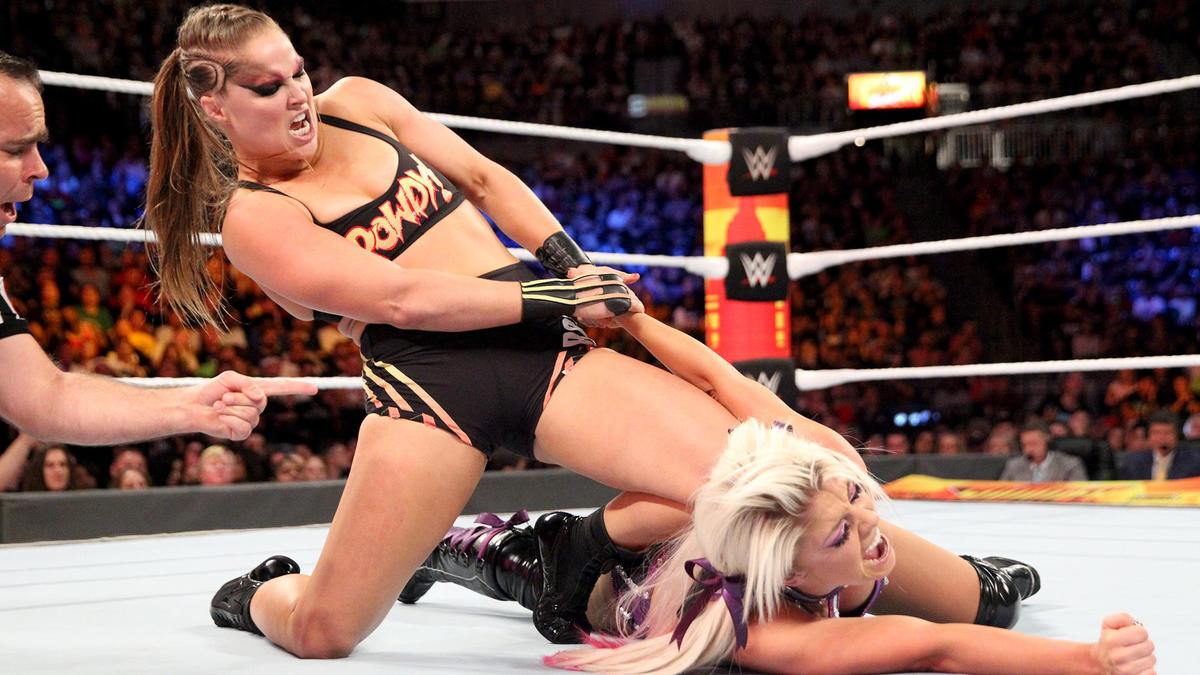 What was on Ronda’s face? What is that makeup? Did Jeff Hardy not have any time to help her out? Does she want to be Proxima Midnight? Luna Vachon?  Or did she have a Create-A-Wrestler from an old SmackDown! game in mind when she showed up? What if Ronda has terrible taste and we only didn’t know because she couldn’t rock that in the UFC?

Alexa is great. She’s a real character. She’s the bitchy high school cheer leader who always gets her way through manipulation and cattiness. Ronda is radical. She’s a real badass. This match had one way to go and it nailed it. Any Ronda match against anyone but Nia Jax or Charlotte Flair should be this. Ronda would destroy every woman in the history of the company. This was the exhibition squash it needed to be.

The Bella’s can GTFO.

Two thumbs all the way up! 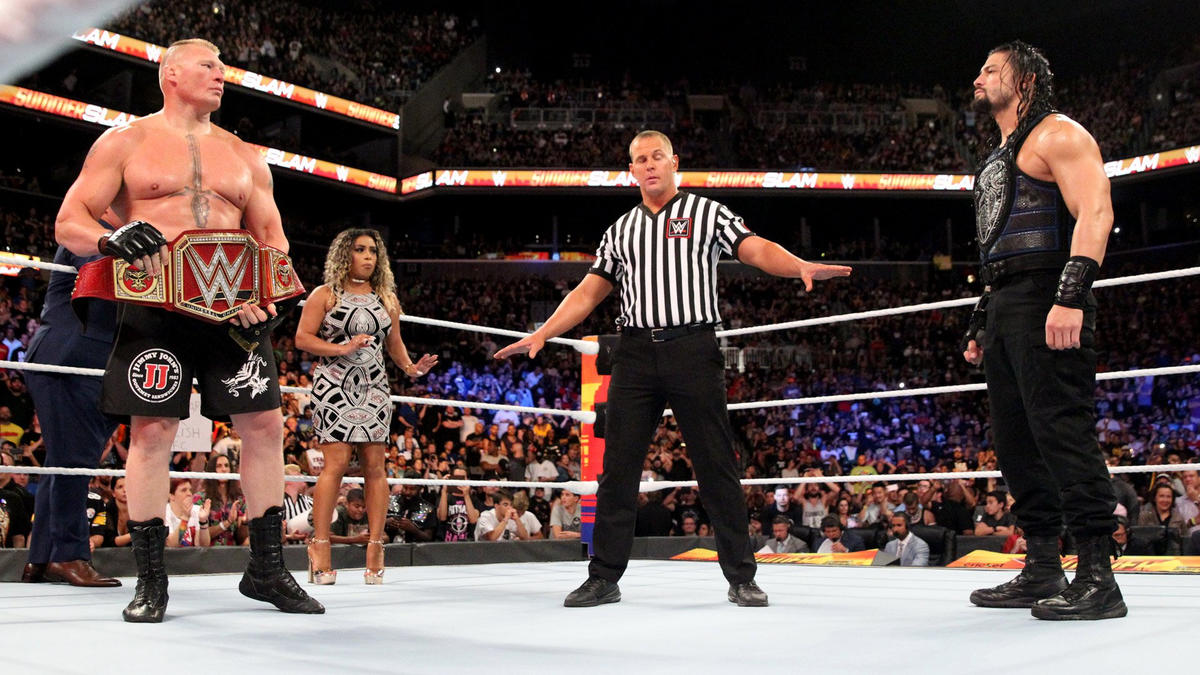 Roman is great. Brock is better the less he does otherwise every match is the same. He does some crappy fake UFC strikes and then a bunch of suplexes before getting gassed 5 minutes in only to get hit with a babyface comeback before squashing it.

The Braun Strowman promo was weird. “I’m so manly I refuse to be a coward and stab anyone in the back. That’s why I’m going to stand here all match so you know I’m going to cash in after you’re tired and beaten and bruised and exhausted, instead of you being surprised by me cashing in under those circumstances.”